I got a postcard from a friend of mine from Haida Gwaii recently and to my surprise I was overwhelm with this joyful sensation that took me back to my childhood,. you know, way back at the dawn of time—or at least before twitter and Facebook—friends usually told friends and loved ones of their travels and adventures through postcards. These are usually pictures of scenic vistas or typical scenes of tourist spots. Notes are jotted on the back, they’re addressed, and for the price of a stamp, are sent from anywhere, to anywhere. In this day of instant digital photo sharing, sending a postcard is becoming a lost art. I’ll tell you a little bit about it—and next time you’re someplace really great, send us a postcard! 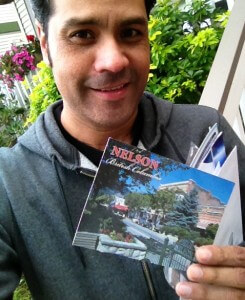 A postcard takes your recipent’s thoughts to the place you are at.

Any great correspondence starts with something to write on. For the tourist “wish you were here” types of postcards, every gift shop at every resort everywhere in the world will have postcards. Whether you’re at Sun Peaks in the Okanagan or at Lego land in San Diego, you’ll find professionally-shot postcards that look great and will make your friends drool with envy. Why wait? Sometimes you see a postcard that you just know will make somebody laugh. Get it!

Make a sport of it, like the gnome in those Travelocity commercials, or the man who had a squirrel invade his home, sending postcards can be a game. There was a fellow who had a squirrel invade his house one summer. After two weeks of trying to catch it, he finally succeeded. He drove 30 km out of town, and released the squirrel. A few days later, he received a postcard from one “Mr. Fuzzy.” Then another, then another, as the intrepid Mr. Fuzzy traveled the country. Several friends jumped into the game, and by fall he had received postcards from major cities around the world. You too can create your own “Mr. Fuzzy.” Make up an alias for yourself and send a friend or a relo (Australian for relative) a postcards from all over, signed by your alias. 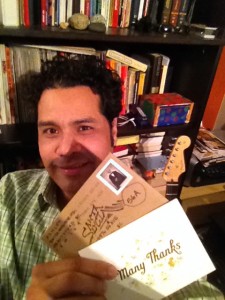 when I sit at the desk I take so much joy opening postcards from friends.

The first rule of postcard writing is, there are no rules. Put the date in the upper right of the note area, decide who you are sending the postcard to, write your message. Write as much or as little as you like. Don’t write at all but instead draw a picture depicting your favorite moment of your trip thus far. It really is up to you. Some people choose to write as much as possible, filling up the text area, then writing along the bottom, up the right hand side, upside down along the top, and on down the left side. Go wild so long as there is space to write your recipient’s address.

Give your recipient an account of your favorite moment of the trip so far. Something along the lines of: It was so funny walking on Squeaky beach, so much that I started giggling along to the sounds of my feet pressing against the sand. 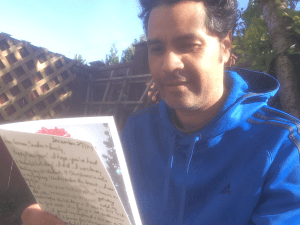 In the patio having coffee, reading my friend adventures.

Another idea is to give an account of a weird food you have tried: You won’t believe this but two days ago I tried kangaroo tail, crocodile meat, and a green ant, all in the same day! The kangaroo tail was a bit greasy but the Crocodile tasted like–you guessed it!–chicken. But most surprising of all, the green ant tasted like a sour grape! The land down under sure is an interesting place!

Sign your card. Since formality is not a requirement for postcards, say goodbye like you were talking to them. You might consider closing with something like, “hope all is well” or “You would love it here!” so that your recipient doesn’t die of envy. Write the address on the right side of the card. Some cards will also have lines for you to write the address on,. for example my Haida Gwaii friend uses every inch available on the post card and I love that since you want to say so much for that person you care about.

8 Responses to “Write a postcard to a friend..”