At the Houston airport last summer my flight, like any other flight that day was delayed due to a lightning storm. I grabbed a juice and looked for the most secluded spot I could find. I found success at the terminal landing a nice solitary corner only to hear the announcer another flight has been moved to gate A13. Was it just my luck? Or was it meant to be an experience for me to write about?. Regardless I saw my little piece of airport heaven going down the toilet when I saw at gate 13 a train of people were moving my way. With juice in hand and sitting on the floor I delighted in myself to have some people watching fun. Read this article in Spanish. 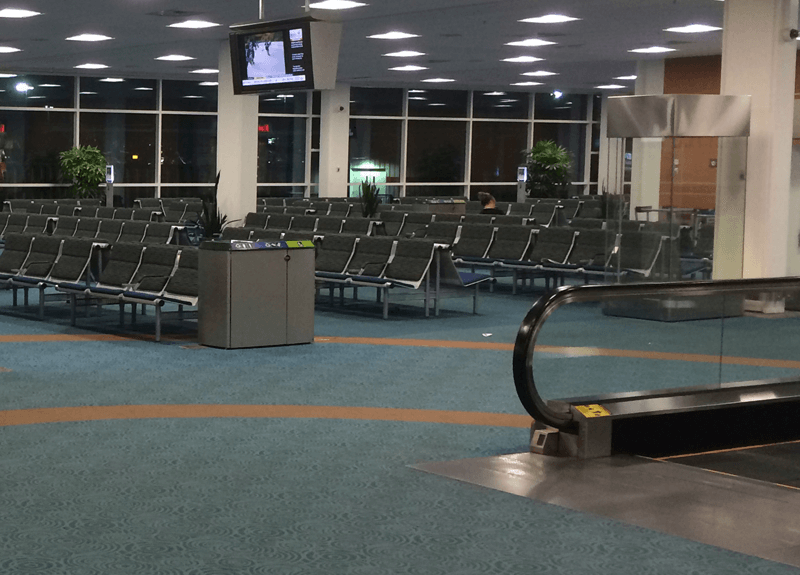 Consumption will consume you..

Always fun to see the flow of people coming and going, the items they carry, the amount of boxes they bring with them. The suitcases filled to the brim with luggage and zippers expanded to keep the bag close. Counting the amount of travelers wearing the same-color shirt going to volunteer in poor countries to make a difference.

One of these volunteers was Cody, a kayaking-lover, passionate-snorkeler in his 50’s from Vermont on his way to French Guiana. He joined me in the people-watching fiesta, and he seemed like a pretty down-to-earth-kind-of-guy. We ended up having a refreshing conversation about people doing all sort of challenges nowadays. Running insane marathons to bike excursions across continents. Going to extreme lengths to consume the healthiest of weird food to extreme yoga, life style and accomplishments.

Everything is extreme this, extreme that, thinking their bodies can take the beating every time you add a radical change to it. Some even want to drag you into their so called healthy extreme routines just for the sake of “it’s healthy for you”. Sure that’s a great way to loose weigh or get your self-esteem going, or simply just looking for that habit your body needs, but when you get to be a certain age your body will tell you.

You know that extreme diet you put me on when you were in your forties? Well, guess what? Now it’s my turn to tell you I didn’t like it!

Let’s leave that for a future article. I noticed there is another kind of extremism going on being totally ignore out there I said, “Consumption”. Certainly is not new and what’s disturbing is that you and I think that only formidable countries do it, when more and more developing countries are jumping on the band wagon creating this consumption need among its citizens.

Governments are being advised by ill economist and their consultants about what their economy needs. There is a famous saying from a certain president stating “go out there to the malls, buy and consume because if you don’t terrorist will win”.
The definition of consumption “is the process in which the substance of a thing is completely destroyed, used up, or incorporated or transformed into something else”. Consumption of goods and services is the amount of them used in a particular time period.

The ancient Greeks describe this as far back as 460 BC. Hippocrates identified phthisis or consumption as the most widespread disease of his age, but what he meant was Tuberculosis and the consumption that leads to it. Business leaders seemed less enthusiastic about the prospect of a society, no longer centered on the consumption of goods. What families are facing today looks more emphasized on work – more work, higher productivity and to consume virtually anything.

To be aware of your own consumption and doing something about it seems to be a threat to business and political elites, holders of wealth, and one percenters. Their only aim is to satisfy human physical need, more hours in the day to work so you can feel tired and fix it by shopping. Their profits motives becomes both the creator and satisfier of spiritual needs. The manufacture displays iPhone and iPads in pretty boxes and tries to convince us that is solace to our souls.

Mental income increases each and every day where people are realizing the worthlessness of working to death. There was no use in working any more time than I had to. Leaving me with less time for leisure, family, the enjoyment of my surroundings, my neighbors, the beautification of my community garden, being able to have the time to see my kids playing sports, having time for my hobbies, seeing my other pleasures, I have experiences that and definitely harder to translate into dollars. Becoming “richer than you think” like the ad says in terms of your social life.

One woman holding a huge cup of chai tea and a strong southern accent joined the conversation, she seemed worried about the long hours worked by her son she claimed, “He has no time to live, to visit and spend time with his family, and to do the other things he really loves to do.” Everybody thinks they are going to get rich when they got that eight-hour deal plus working overtime, really doesn’t make a big difference.

Her contagious and almost preaching, talking accent ends abruptly when she hears her flight boarding, leaving us surmising if she was mad or she was just concern. “What you take to that 10×8 hole at the end of your road will not aloud you spare room for your material belongings”. As she grabs her carry-on bag and loose herself into the boarding line.

My rant here is not about preaching politics nor brain washing you to completely quit your job or go green. I think my short lived Houston friend and I were just voicing our awareness within ourselves to make the right decision about how you want to live, what kind of planet you want to live on for you, and your kids.

We can all easily think of fitness, food, even adventures when it comes to extreme but can you control your extreme consumption? Can you develop an extreme program to make you not want to shop for what you don’t need? Unfortunately, as some of us have discovered sooner or later consumption will consume you.

Pick a day or two of the week where the challenge is not to buy anything new (excluding food). This would not be too much of a challenge if you make a list of things you need for the week, check off the ones you can live without, and find an alternative way to get the rest of the items (second hand, borrow it, make it). I’m trying it myself, I find I didn’t have a very long list, so this could be relatively easy to try.

What about people who do need to buy something new? They can do so, all it takes is moderation.

I was approaching my time to board, Cody still had a couple of hours to go, and we shook hands and said our good byes. I mentioned it was very refreshing and fortuitous to have had this conversation with someone from a society that turns anything into a product and profit. Cody, was very much aware of the fact that it has been a blessing as much as a curse. I worry he said. “Other societies are picking up the bad habits of consumption, and for sure it will be hard to reverse that”.

We can break that cycle by turning off our consumption machines when industries create enough of what we need. Doing so will give us an opportunity to re-create the kind of healthy communities that are beginning to emerge, communities in which welfare is the overriding concern rather than subservience to machines and those who manufacture them.

A society where people have time to play together as well as work together. That fertile mix of human relationships is necessary for healthy human societies and in turn a healthy planet. Saving our earth means saving ourselves from ourselves, and our need to consume.

Would you be able to follow a program like this? Can you challange yourself to not want to shop for what you don’t need? If you do tell us about it, or any ideas you might have. Share your stories.

4 Responses to “Consumption will consume you.”