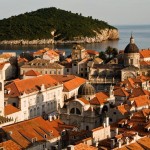 Dubrovnik, also known as Ragusa, is a city on the Adriatic Sea coast of Croatia, positioned at the terminal end of the Isthmus of Dubrovnik. It is one of the most prominent tourist destinations on the Adriatic, a seaport and the centre of Dubrovnik-Neretva County. Its total population is 42,615 (census 2011). In 1979, the city of Dubrovnik joined the UNESCO list of World Heritage Sites.

Stradun or Placa is the main street of Dubrovnik, Croatia. The limestone-paved pedestrian street runs some 300 metres through the Old Town, the historic part of the city surrounded by the Walls of Dubrovnik. Many of the historic buildings and monuments in Dubrovnik are situated along the Stradun, because of which it serves as a popular esplanade for tourist. 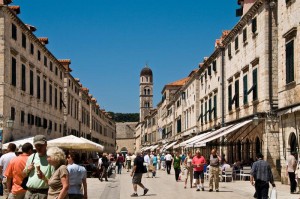 The prosperity of the city of Dubrovnik has long been based on maritime trade. In the Middle Ages, as the Republic of Ragusa, also known as a Maritime Republic (together with Amalfi, Pisa, Genoa, Venice and other Italian cities), it became the only eastern Adriatic city-state to rival Venice. Supported by its wealth and skilled diplomacy, the city achieved a high level of development, particularly during the 15th and 16th centuries.

The Bay Beside Dubrovnik Used In Filming For Game Of Thrones. For the second season of Game Of Thrones shooting of the Southern scenes shifted from Malta to Croatia, where the city of Dubrovnik and nearby locations allowed exterior shots of a seaside walled medieval city. The Walls of Dubrovnik and of Fort Lovrijenac and Trsteno Arboretum were used for scenes in King’s Landing and the Red Keep. The island of Lokrum, the St. Dominic monastery on the island of Trogir, the Rector’s Palace in Dubrovnik and the Dubac quarry a few kilometers to the east were used for scenes set in Qarth.

Lokrum is an island in the Adriatic Sea 600 metres from the city of Dubrovnik, Croatia. It stretches from northwest to southeast and receives regular ferry service from the city. Austrian archduke (and short-lived Emperor of Mexico) Maximilian once had a holiday home on the island. A monastery and a botanical garden survive from his era. On the island’s highest point at 96 m. above sea level stands Fort Royal Castle, which was built by the French, though it was later named “Maximilian’s Tower” by the Austrians. 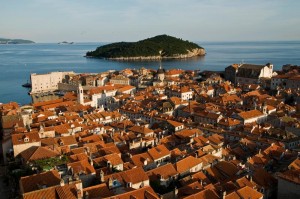 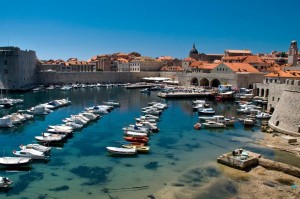 The Walled City of Dubrovnik