Kosterhavet National Park, which was established in 2009 on the centennial of Europe’s first national parks, a set of nine parks all in Sweden. In conjunction with Norway’s adjoining Ytre Hvaler National Park, Kosterhavet protects a sprawl of ocean about the size of Vermont that’s home to some 6,000 marine species. Kosterhavets is centred around the Koster Islands, two hours north of Gothenburg, and of the 450 sq km it covers, 390 are underneath the water’s surface. The Koster-Väderö Fjord is located within the park with 200 different species of animals and plants that can’t be found anywhere else in the country, including reefs of deep-water coral Lophelia Pertusa. The fjord’s seabed is a unique environment with both hard and soft seabeds at a depth of over 200 meters, along with shell sand bottoms, and shallow seabeds out towards Skagerrak. The Koster-Väderö Fjord is also connected to the Norwegian Trench, in turn connected to the Atlantic Ocean, with conditions in the trench that are almost oceanic. This means creatures that would normally be found on the continental slopes thrive here. The fjord is also an important breeding and nursery ground for fish and shellfish. “Oysters always taste best when you open them yourself,” The first rule of shucking oysters, is that you need a good glove, you slice the oyster in half and with oyster in one hand and a knife in the other you drive the pointy edge in to the shell’s crack and as soon as you hear the crushing sound of the shell immediately you need to suck the juice before the flavour runs of of the shell. That’s the way they do it on the Bohuslän Coast, puttering between smooth gray granite islands topped by red cottages. This 112-mile stretch from Gothenburg to the Norwegian border on Sweden’s west coast—or the “best coast,” as some call this playland of villages and 8,000 islands and islets—has always been a summertime magnet for locals. 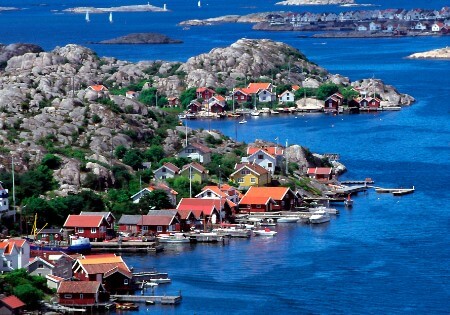 My journey had begun in Gothenburg, Sweden’s second largest city, where I rented a Volvo and took the E6 highway north. Tempted as I was to explore the harbor and the city’s 17th-century center, the highway proved to be a Scandinavian autobahn. Within minutes I’d passed the suburban Ikea and found myself in the countryside, where immaculate red farmhouses contrast with the deep green pastures, and just as quickly are replaced by cliffs and pine forests.

I had allowed two nights to drive 100 miles to Strömstad, 12 miles shy of the Norwegian border, where a ferry could take me to South Koster Island and the Kosterhavet, Sweden’s first national marine park. But first, I keep giving in to detours. Even before the oyster cruise, I couldn’t resist the draw of salt water. But in recent years international travelers like me have been drawn to Grebbestad’s clean, cold salt water that produces 90 percent of the country’s oysters, 70 percent of its sea crayfish, and almost half of its lobsters. This area has been inhabited for hundreds of years, but we may as well be miles from civilization, paddling past islands of naked pink granite that slope into water that’s, surprisingly, almost as warm as the Mediterranean. A half dozen seals swim between my kayaks, rising lethargically out of the water as if waking from a winter’s sleep.
I land on an isolated pebble beach on the southwest corner of Stora Kornö. The island looks deserted, but we hike about a mile into the hardwood forest to a 17th-century village. Yards sprouting daffodils front a cluster of 50 flawlessly restored cottages.

Most have been handed down from generation to generation. The scene is straight out of a storybook. I’m envious of the Swedes who never left. Söderholm tells me that to buy a cottage here today would cost at least a million dollars.
Herring is so big on the West Coast that the folks here celebrate ‘the Day of the Herring’ on June 6. Sweden the Day of the Herring’ on June 6.

Join them for a bit of feasting and raise a glass to this mainstay of the picturesque fishing villages here. Check out famed Klädesholmen and Swedish floating favourite, waterfront restaurant, Salt & Sill. Join the local fishermen on a seafood safari for lobster, oysters and mussels.

Fish for oysters, Norway lobster and lobster (from 7 am on the first Monday after the 20th September) on a guided shellfish safari, or look for seal colonies in Sweden’s most species-rich waters. The on board underwater camera lets you meet the fascinating creatures of Kosterhavet in an adventure that takes you deep into the ocean. Cycle or paddle around the beautiful Koster Islands.

2 Responses to “Oysters taste best when you open them yourself.”