Melbourne is filled with some of the most inventive bridges I’ve seen in the middle of a city center. If you’re a fan of crazy, funky, modern bridges, then this is a great place for you. Even better, the bridges look totally different at night than during the day… it reminds me a lot of the art that is at Burning Man! 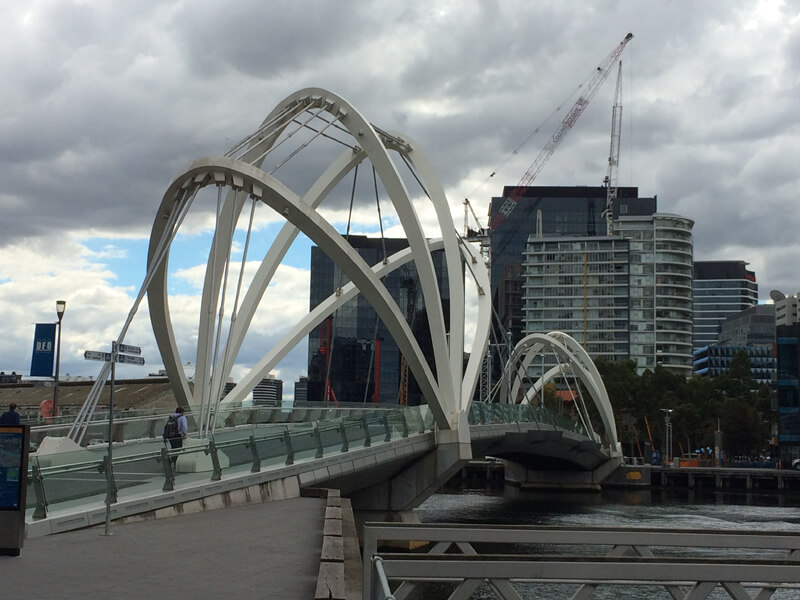 Most of them are beautifully situated on the Yarra river and strategically connecting downtown Melbourne with Docklands, an urban renewal project, which transformed a large disused docks into a new residential and commercial precinct for 25,000 people. You can walk around Docklands or you can hire-a-bike. 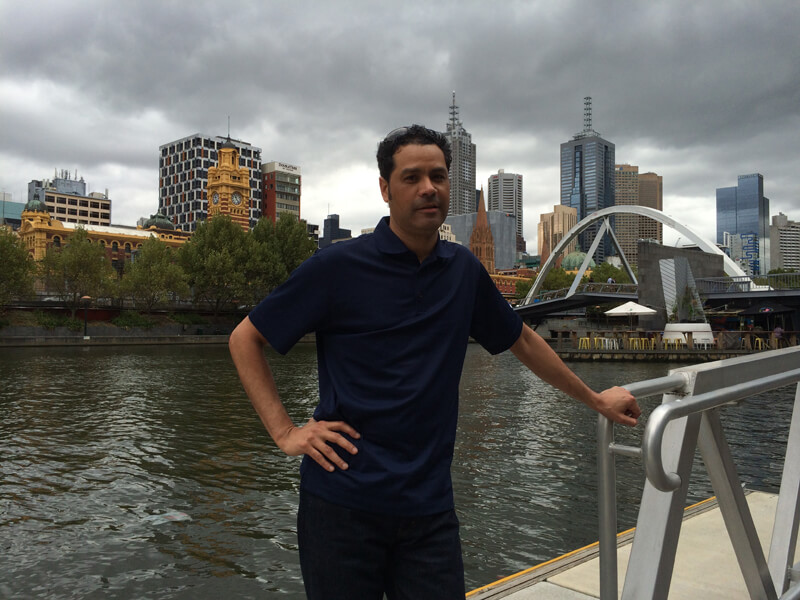 Crossing to Southbank with the Flinders walk bridge in the background.

Melbourne has added the “rent a bike” program that has become very popular in London and other cities. It’s great to find a city designed for ease of bicycle and pedestrian traffic, as well as the other forms of transportation, including the City Circle Tram — which is free for visitors. 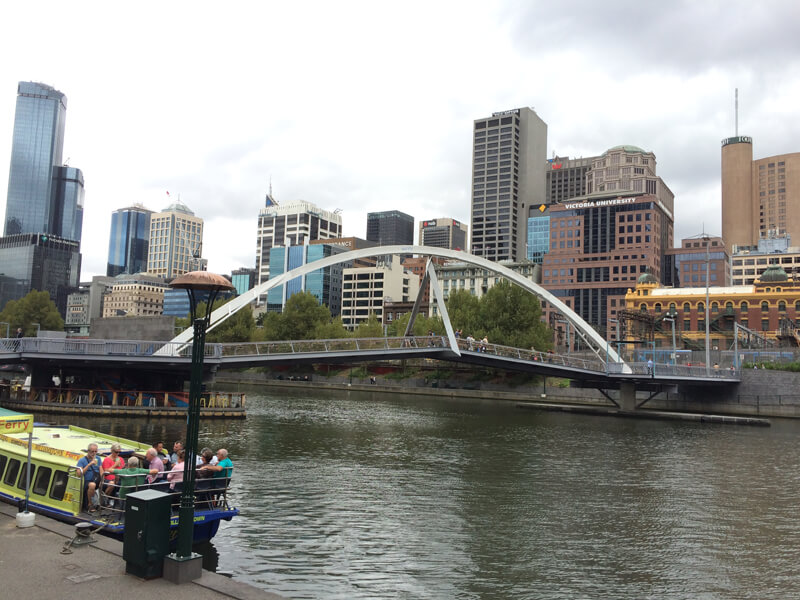 Flinders walk bridge over the Yarra.

This bike rental system is a real genius. You can rent a bike for as low as $2.60 for 30 minutes (more for longer duration, weekly/annual/corporate passes are also available) from any rental stand scattered around the CBD and drop it off in another stand. The stands are automated. Helmets are required though. You can buy one for $5 in retail stores such as 7-Eleven.

Even the old is preserve to respect the past and accommodate the future. 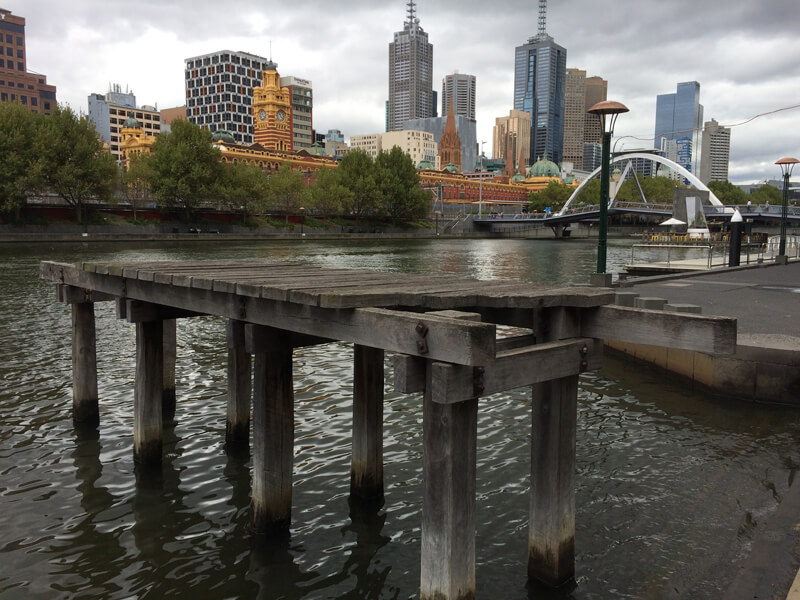 Old wooden dock at one time used as a crossing bridge.

I like these cities that get all fancy with their bridges. Melbourne certainly does! Each bridge tries to out-do the next. There’s no common theme and its sort of a mish-mash of styles, to say the least. 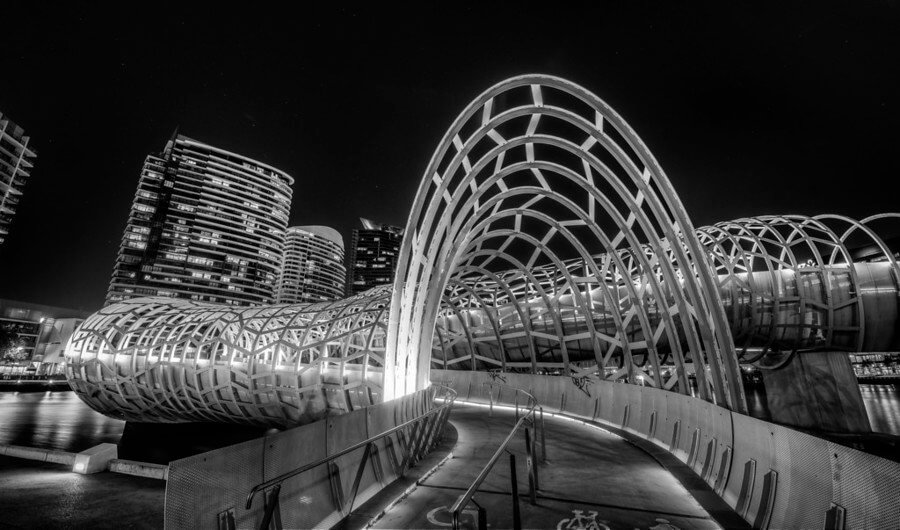 Docklands Park before crossing the Yarra River on Webb Bridge.

I think that not everyone likes this, but I do. I don’t mind all the variety, especially from the perspective of photography not to mention the clever way urban designers have come up with a way to connect hi rise-density neighborhoods like they did in Melbourne. 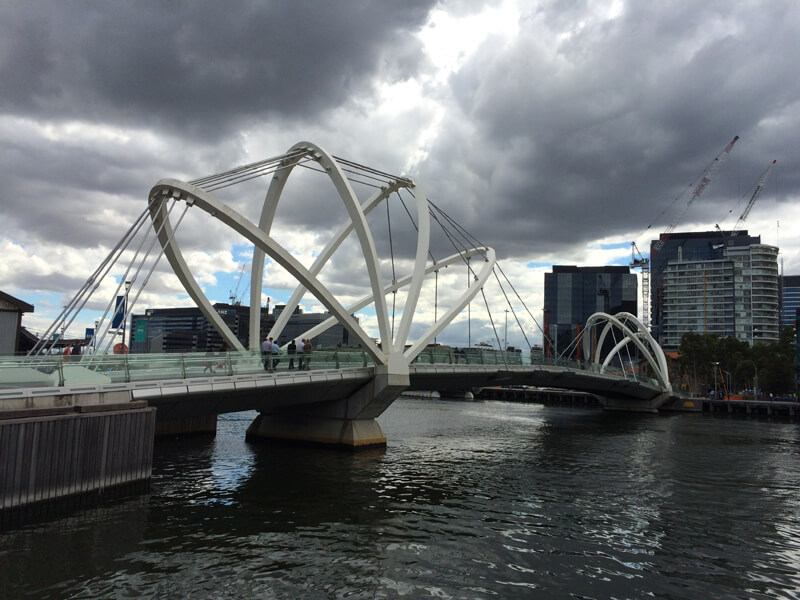 It’s kind of the same way with the buildings and other decorative elements around downtown Melbourne. There are so many styles, most of which are one flavor of “modern” or “contemporary”. I enjoy mixing and matching different elements into compositions, but it is not easy. There is a challenging aspect to it that I don’t get in many other cities.

The Sandbridge, originally a railway bridge no longer in operation now serves as a pedestrian river crossing,. talking about having something old, new again. Clever! 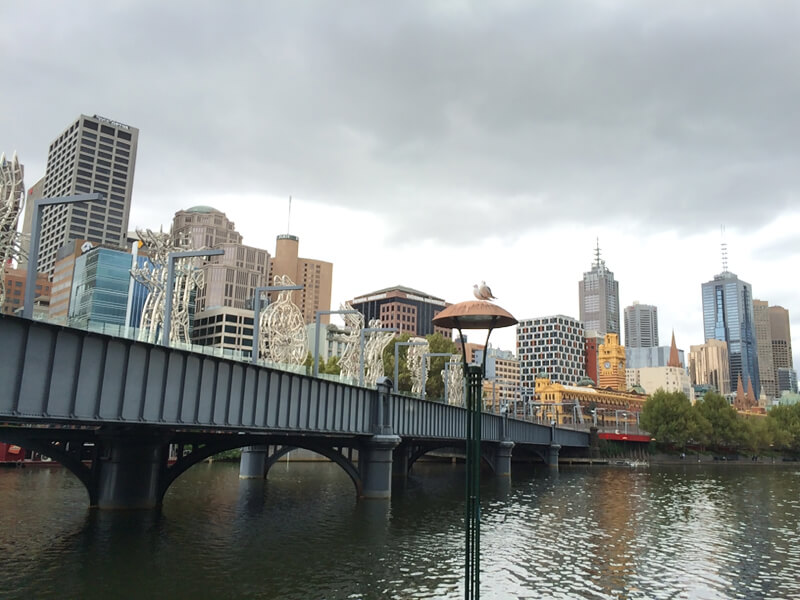 The Darling of the past Princess Bridge, adding a grandiose entrance to the city from federation Square still alive and kicking with its majestic brick walls, excellent surviving examples of arch bridge technology design of the late 19th century and its unique Victorian coat-of-arm. 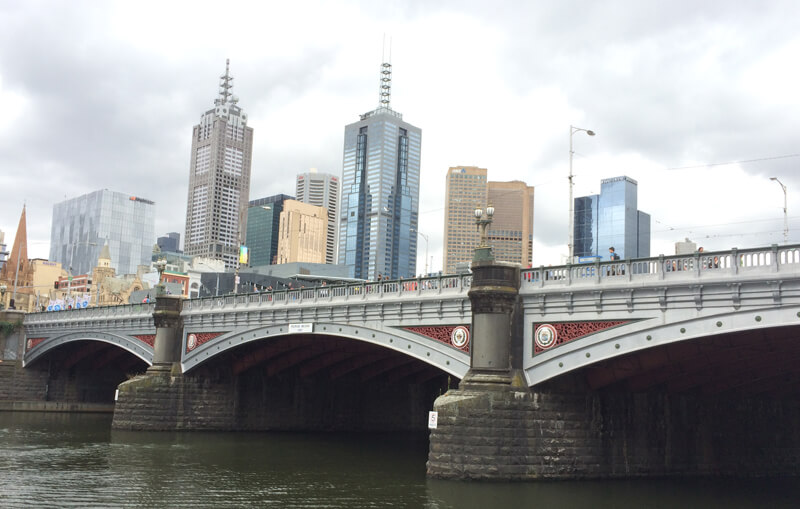 Princess Bridge, built on the site of one of the oldest river crossings in Australia.

6 Responses to “Speaking of outside art..”