The Great Ocean Road is an Australian National Heritage. It represent a coastal region of stretching 243 kilometres (151 mi) along the south-eastern coast of Australia between the Victorian cities of Torquay and Allansford. Built by returned soldiers between 1919 and 1932 and dedicated to soldiers killed during World War I, the road is the world’s largest war memorial. 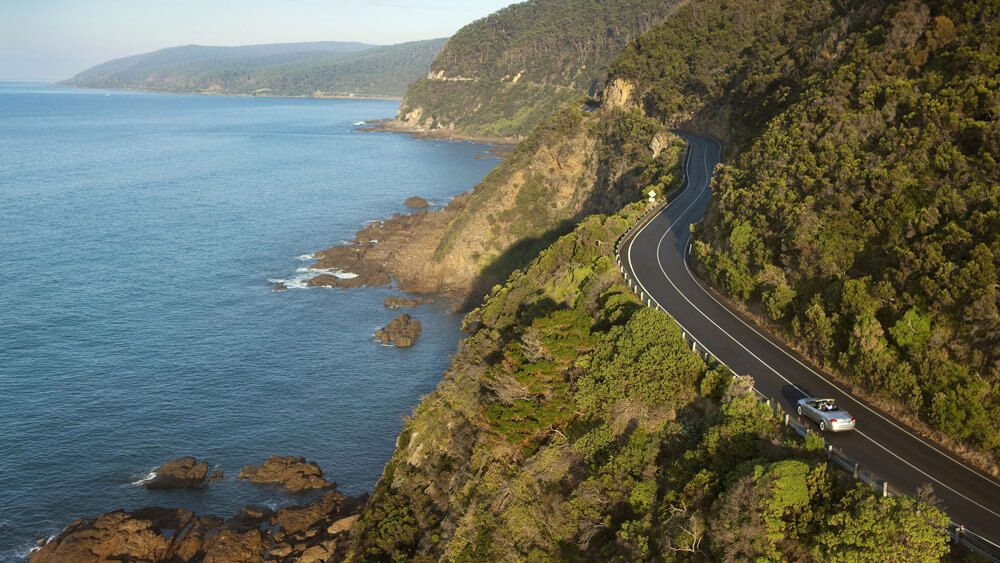 Winding through varying terrain along the coast and providing access to several prominent landmarks, much of the road hugs coastline affectionately known as the Surf Coast between Torquay and Cape Otway and the Shipwreck Coast further west of Cape Otway, providing visibility of the Southern Ocean.

The road traverses rainforests, as well as beaches and cliffs composed of limestone and sandstone, the most incredible landmarks including the Twelve Apostle limestone stack formations. Formed by erosion: the harsh and extreme weather conditions from the Southern Ocean gradually eroded the soft limestone to form caves in the cliffs, which then became arches, which in turn collapsed; leaving rock stacks up to 45 metres high. Now because of this erosion there are less than ten remaining. On July 3rd 2005, a 50 metre tall stack collapsed, leaving eight remaining. 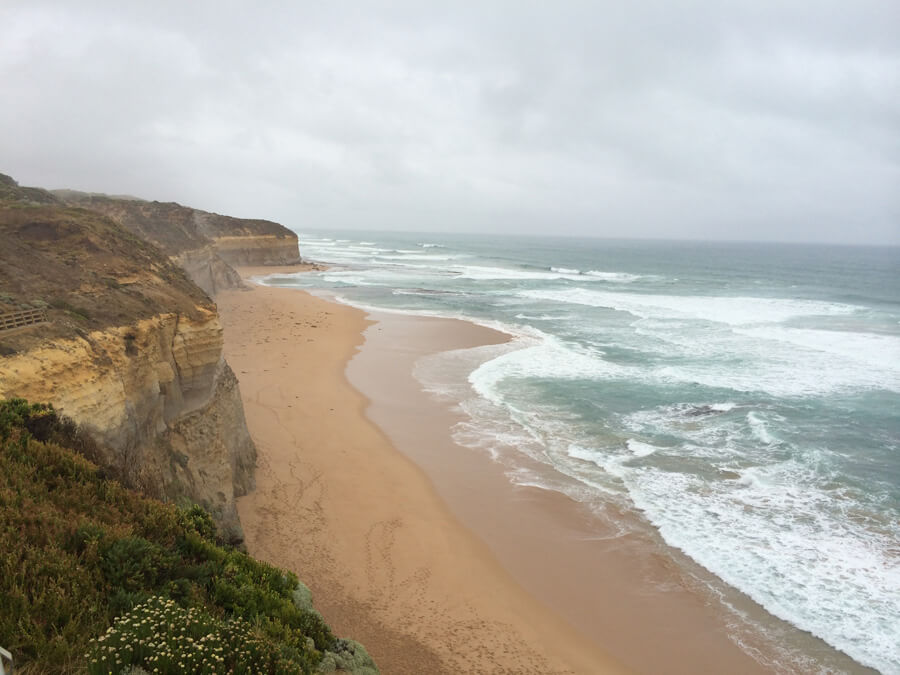 The great ocean view to the Southern Ocean

This stretch of Victoria’s dramatic coastline road covers an incredible range of scenery. See monster waves at the iconic surf spot of Bells beach, which i really recommend. Laze on the golden sands of Lorne, by the way i made a stop here for great one too. You can swim, surf, sea kayak or fish in Apollo Bay or soak up salty history in the charming old fishing village of Port Fairy. Enjoy family friendly swimming at Anglesea or get wild and windswept on Shipwreck Coast.

This long and curving road its a great way to get close to native animals. You can watch southern right whales during their annual migration. See koalas, kangaroos, emus and waterbirds roam freely at Tower Hill State Game Reserve. Enjoy a game of golf alongside grazing kangaroos in Anglesea. See koalas in the wild at Kennett River and in the Great Otway National Park. Check out hundreds of fur seals at Cape Bridgewater and watch glow worms put on a spectacular light show at Melba Gully in the Great Otway National Park. Swim with dolphins at Queenscliff on the Bellarine Peninsula. For something different, canoe alongside platypus on Lake Elizabeth at dawn. 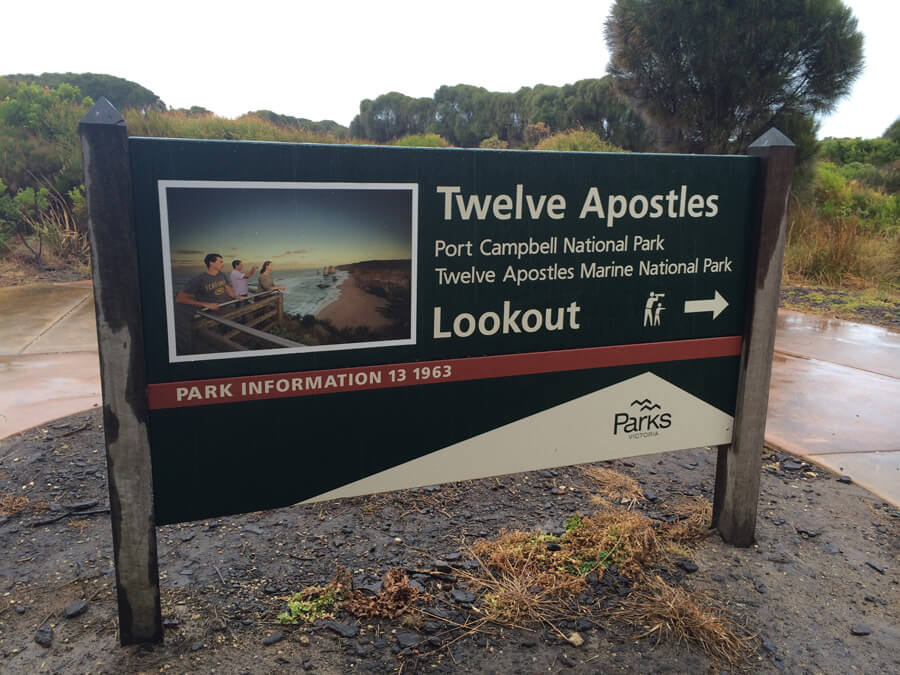 When we got to Twelves Apostle we had a rain storm coming from the Southern ocean,. we could see the dark clouds approaching the coast but when you are at this magnificent place so naturally special I was determined to wait it out and brave the rain, which for us back in Vancouver its pretty normal., an explore the beach down below. People access this spot by climbing down the stairs carved out of the cliff’s limestone walls. 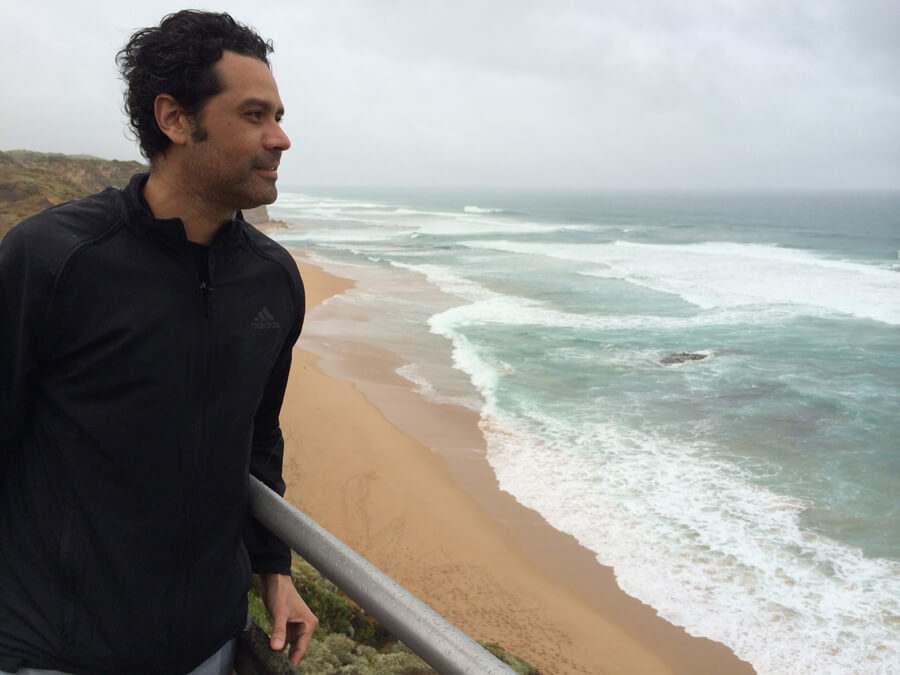 We are finally here,. the great ocean view to the Southern Ocean

The Sand beneath my feet were a soft, grainy, terracota indulgence walking barefooted close to the edge of the ocean, feeling the energy of this fairy beach and hearing the mighty roar of the crashing waves. My steps sinking in the wet sand, looking straight out this open ocean having the thought that if you set out from this spot you will end up on the continent of Antarctica, this part of of the world its a very unique experience in a sense that all you see and hear it makes you feel so far away from everything you know. 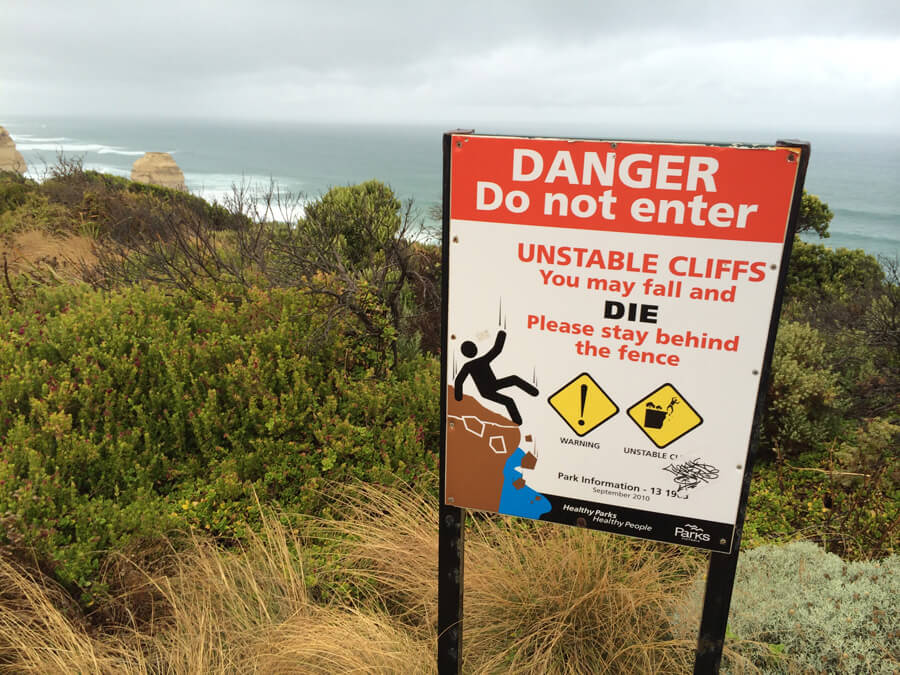 A very Aussie way to tell you don’t be a bloody idiot. 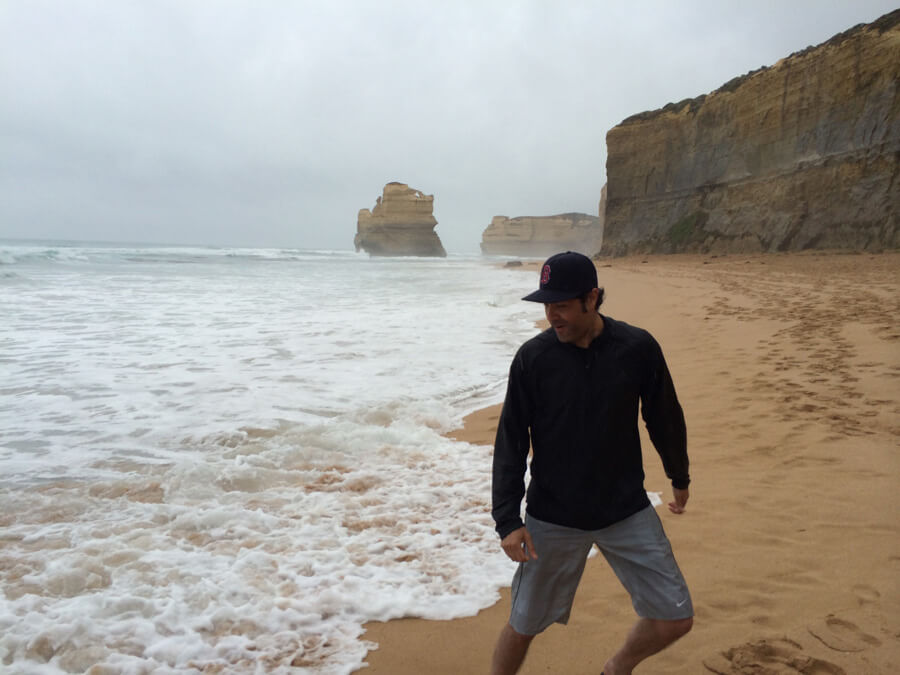 The incredible surf at Twelve Apostle

I loved this place so much that I didn’t care it was raining on my holidays, the rain storm passed within a couple of hours, the sun was shinning and it was time to have late lunch in nearby Port Campbell where the fish and chips are what I can testified to be the best on this planet. I know another place with good fish & ships back home in White Rock, BC but Port Campbell takes the crown,. but that’s a story for another time… 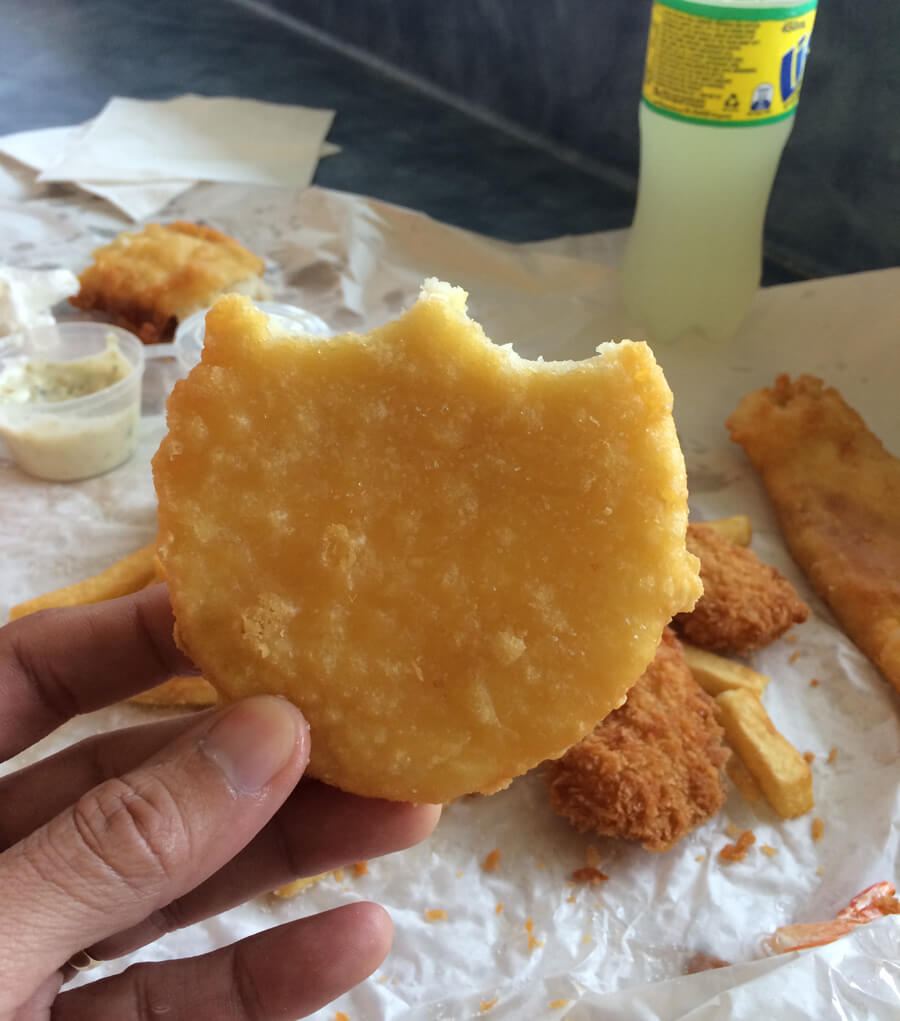 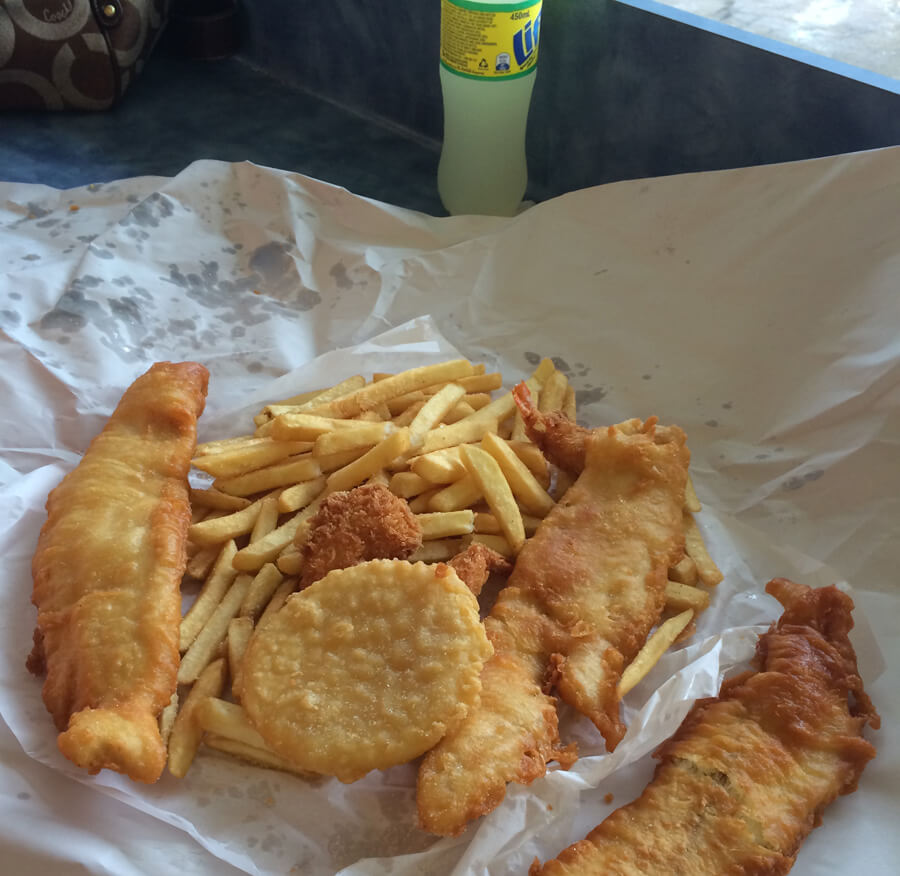