In the wilderness of the BC coast there is a lodge like you’ve never seen before. This is the story about the visionaries behind BC’s hottest wilderness lodge.

On the walls of the “Memory Room” at B.C.’s most intimate wilderness retreat, words stretch across framed page after framed page of yellowing letterhead, each emblazoned with the logos of Fortune 500 behemoths – Boeing, McDonald’s, American Airlines. Other, more discreet, pages display handwritten accolades and the signatures of Hollywood stars, a former leader of the free world (George Bush), an ambassador from outer space (William Shatner) and his soon-to-begalactic successor (Richard Branson). “As I work my days in the concrete jungle, I can still close my eyes and ‘feel Nimmo,’” says one. Another quips, “I believe you must be the Fountain of Youth, the Givers of Freedom and the Gods of Play.” Voices of powerful men and women, movers and shakers in the international worlds of business, politics and celebrity, left gobsmacked – changed even – just as we regular Joes are by Nimmo Bay Wilderness Resort. 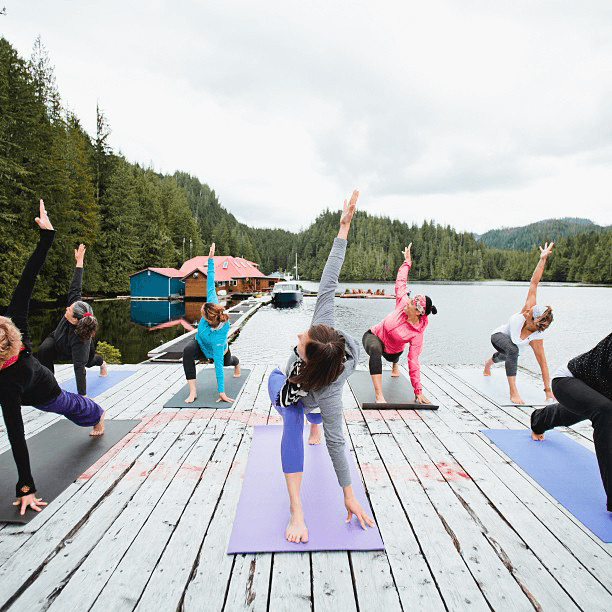 For while perhaps a dozen or so wilderness retreats in B.C. also qualify as “remarkable,” going to Nimmo Bay feels profoundly like going home, no matter how far one journeys to get there.

Before I met Deborah Murray I’d already “found Nimmo.” As a weekend guest of her son, Fraser, I’d eaten meals pulled from the ocean off the resort’s dock and from the fields of nearby Vancouver Island; meals served at the table where, for almost 40 years, Deborah and Craig Murray have hosted family and friends. I’d drunk from taps connected to a waterfall via a pipeline they’d laid. I’d seen Deborah’s photograph – her wide smile, eyes still gleaming with adventure, even in her sixties – and read a book about her life: her solo motorcycle trek across Europe in her teens, her brown belt in karate.

And I felt a kinship with this Newfoundlander whose fate was sealed in the 1970s when, exploring Vancouver Island’s east coast, she hitched a ride heading north to Port McNeill. In a resource town known for its shortage of eligible women, she then took a waitressing job at one of two diners – where she served coffee to Craig Murray, a broad shoulder sailor and logger with mischief in his eyes. A couple of days after, and before going on a single date, he brazenly announce she was going to marry him. Within 10 days, she had. Four years later, she followed her new husband into the wilds of the Great Bear Rainforest with their young sons, Fraser and Clifton, to build a life called Nimmo Bay Wilderness Resort. 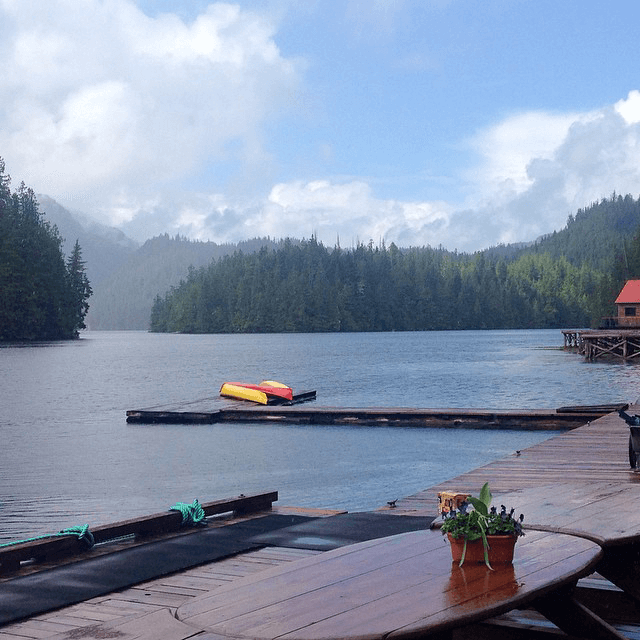 “Our jobs were keeping us apart, and Craig wanted to do something unique that would keep the family together,” Deborah explains. “Whether I was on board, not on board, it didn’t matter. I was in love. I was there for my man.” It was also love at first site for Craig when he first saw Nimmo: 130,000 square kilometres of coastal mainland accessed only by marine or sky highway, with a waterfall he had big plans for.

Months later, in spring 1981, the four Murrays (daughter Georgia arrive four years later) were pile into a five-seat Cessna and flying out over Haida Gwaii, the tiny plane loaded with a s many of the family’s belongings as would fit. “the plane was so small, and Fraser had this look in his eye that said, “Is this dangerous?” recalls Deborah. “Craig was all bearded and rough and I was in a skirt – so ridiculous. But we were together. That was all that matter.” Twenty minutes later they landed in the tiny cove that would quickly become the centre of their universe.

And life was cosy – if not always rosy – as the couple built up their fishing and wilderness adventure business. One spring a grizzly staked a claim on the property – Fraser and Clifton had to stay inside for two weeks. One fall, the food and firewood ran out and the Murrays realized they had no plan B. Cabin fever was another challenge. Looking over at Craig one morning, their young sons huddled under a nearby tarp as they dug the ditch for the resort’s waterline in teeming rain, “horrifying thoughts” crossed Deborah’s mind. But Nimmo’s hypnotic isolation and profound elemental pull refused to release either of them, just as word of Nimmo’s world-class heli-fishing and wildlife tours pulled others in. 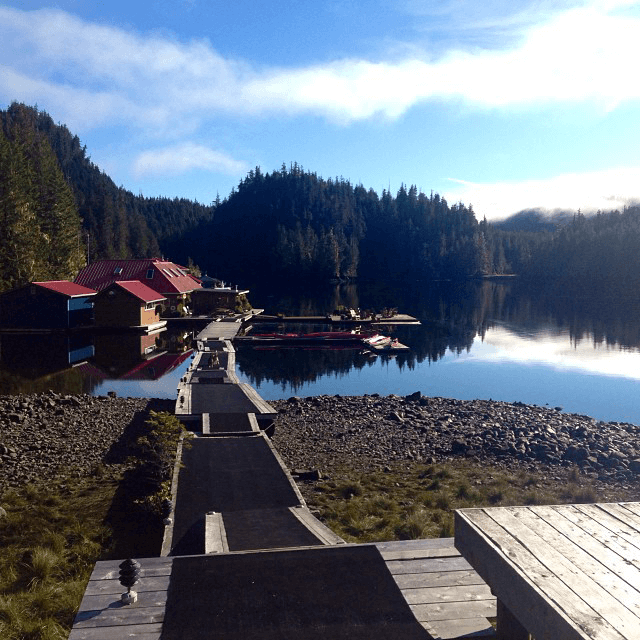 Deborah taught herself how to cook for high-profile visitors. Craig and the boys built float houses for staff and, for guests, intertidal cabins and cedar hot tubs at the base of the waterfall plunging 1,500 metres down Mount Stephens that provided the eco-resort with its power and sweet drinking water.

The Murray’s extraordinary hospitality and jet helicopters, which buzz guest 4,00 metres up from sea level to pristine mountain rivers, lakes and glaciers, captivated everyone: families, celebrities and international business leaders. “Nimmo is the only place in the world where an 18-year-old Scotch will ruin a glass of 10,000-year-old ice,” is how one American business man put it in his Memory Room missive.

Today, Fraser – that cautious little boy who first flew into Nimmo as a four-year-old – is a six-foot backcountry innovator who, with partner Becky Eert, is implementing even more stringent eco measures at the resort. Clifton is a member of the Canadian tenor, performing for the likes of the Queen and Oprah; Georgia, who works full time in sales for Nimmo Bay, is also a singer songwriter. Happy about handing over the reins, founders Deborah and Craig aren’t going anywhere just yet, though; no Florida condo for these two.